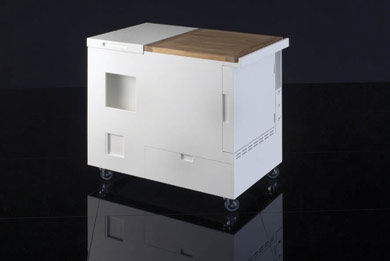 Boffi Mini Kitchen is back. In the late 60s, Italian architect and product designer Joe Colombo designed a series of objects he called Total Living Units. Some of those units were perfect for kitchen use. The Boffi Mini-Kitchens are fine representatives of the Total Living Units family, designed by Mr. Colombo for Paolo Boffi, who owned a kitchen manufacturing company. The Carrellone mini-kitchen was unveiled at the 13th Milan Triennale in 1964, earning Gold Medal, and the company produced and sold several of the units. Now, forty years later, the Carrellone is back as a full-scale production mini kitchen. Whereas the 1963 original unit was built of wood and metal, the new Carrellone is made from a white Corian. But the award winning original design is still in place. This Boffi Mini-Kitchen contains everything you need in a kitchen – a stove, a refrigerator, a can opener, drawers for tableware, working surfaces and storage for cookbooks. Best of all this compact kitchen uses a single electrical plug. Sleek and space-saving design with full functionality from the Carrellone Boffi Mini-Kitchen. 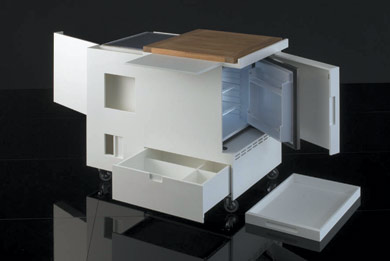