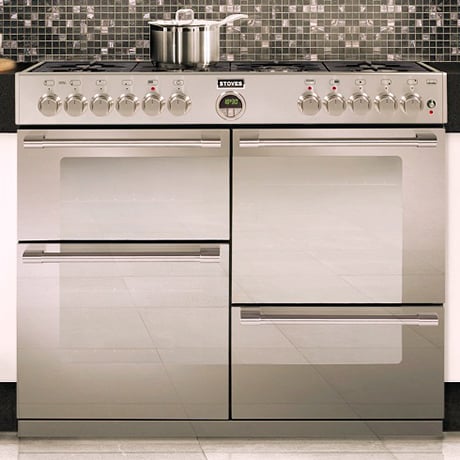 Stoves has unveiled a new-look for one of its most popular contemporary range cookers. The 100 and 110cm Stoves Sterling ranges have been reconfigured to offer even more cooking capacity with the addition of a separate grill. Available in dual fuel, gas or electric variants, the new Sterling offers consumers even more cooking flexibility. As well as a sleek new look, the Sterling offers a main multifunctional electric oven with nine functions, an electric grill, a slow cooker and a programmable main oven. The range cooker also boasts other features such as internal oven lights and telescopic shelves.

The dual fuel Sterling 1000DFT and 1100DFT have a one piece hob with 7 burners, including 3.5 kW wok burner and the 1100E electric model includes an electric hob with 4 induction zones, two ceramic zones and one warming zone. The 1000GT and 1100GT gas models also feature the 7-burner hob, alongside 2 gas ovens, a slow cook oven and the separate variable gas grill.
The Sterling range cooker has an impressive ‘AA’ energy rating and is available in black and stainless steel. Through the Flavours range customers can also choose the Sterling in Jalapeno or white. Stoves.
Previously,
Stoves range cooker
Stoves Richmond
Small range oven

Stoves is expanding its popular Mini Range collection with the addition of the contemporary Sterling aesthetic range cookers. Ideal for those who love range cookers Read More

Ideal for those who want an electric cooker but are limited on space, Stoves has launched an electric version of the very popular Richmond Mini Read More

It is official, Black is back. Stoves has responded to consumer demand by relaunching its 61EHDO and 61GDO freestanding electric and gas double ovens in Read More

Following the continued success of Flavours, a collection of coloured range cookers, Stoves has announced an exciting addition to the collection and the launch of Read More

If you like the idea of colorful appliances, then the recently released Flavours by Stoves collection of colorful range cookers and mini ranges can be Read More

If you have a passion for cooking, but not much space in your kitchen, Stoves 90cm compact range cookers can solve this dilemma. Available in Read More

The 990WN is the new log burning range cooker with that classic style from 1930s. It keeps all the benefits and features of the smaller Read More

The innovative GE Monogram dual fuel Pro range cooker is designed for the person who loves to cook and entertain. And now it is available Read More