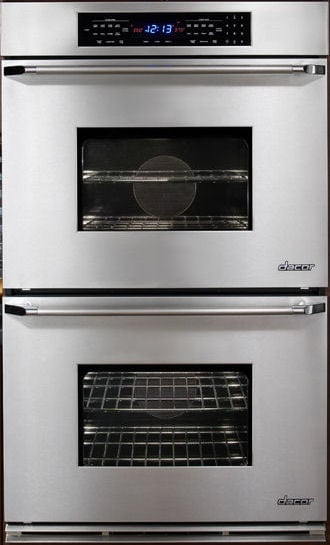 There are several models of excellent Dacor ovens to choose from in order to meet your cooking and decor expectations. Dacor oven from Renaissance Series has classic and sold look, exemplifying Dacor timeless design for your eyes and providing the most advanced performance characteristics for your kitchen and cooking. Dacor currently makes the 30″ Renaissance oven in its Epicure and Millennia lines in single and double oven models, and the 27″ and 36″ wide ovens may be coming soon. Certain double Dacor ovens from Renaissance line are available with convection cooking in both the upper and lower oven chambers, while other double ovens are equipped for convection cooking in only the upper Dacor oven chamber. The cooking functions include four convection cooking modes. Convection Bake – combination of the convection fan and a bottom heat source, good for single rack items in a deep pan, Convection Broil – combination of the convection fan and a top heat source, good for foods that do not need to be flipped, such as thinner cuts of meat, fish, and garlic bread, Convection Roast – combination of top and bottom heat sources with the convection fan, best for rib roasts, turkeys, chickens and Pure Convection – uses convection cooking only for even heat, good for baked goods and multiple rack cooking. You can also bake, following commonly used basic recipes with a bottom heat source only, and broil smaller cuts of meat or toast bread with a top heat source alone. All Renaissance Dacor ovens are equipped with self-clean safety latch, which automatically locks the oven door during the self-clean cycle to prevent accidental opening as the temperatures inside the oven during the self-clean cycle are very high. Normally the self-clean process takes between 2 to 4 hours. Other features are meat probe connector, oven lights, adjustable oven racks, door gasket, electronic control panel display, delay timed cooking and Sabbath mode. Available in several finishes. The suggested prices for 30″ Renaissance Millennia oven is $2,410 for single and $4,195 for double. Epicure single and double Dacor ovens start from $2,935 and $4,720 respectively. Dacor.

With a 4.8 cubic feet interior cavity, the Dacor Renaissance wall ovens provide the largest oven cell capacity available on the market and are equipped Read More

The new 30 inch Architect Series II KitchenAid oven, KEBU208SSS is the first US made full-size, built-in double oven with steam-assist technology in both ovens. Read More

The Scholtes built-in oven, FA 46.1 AN from Tradition series is the energy ‘A’ rated, multi function pyrolytic oven with classic good looks and 9 Read More

For those who would love to own the 30″ TMIO refrigerated dual wall oven but couldn’t agree to part with $7,500 USD, here is the Read More

CDA Appliances are all about performance and reliability. But it is the style which attracts many consumers to this brand and in my opinion the Read More