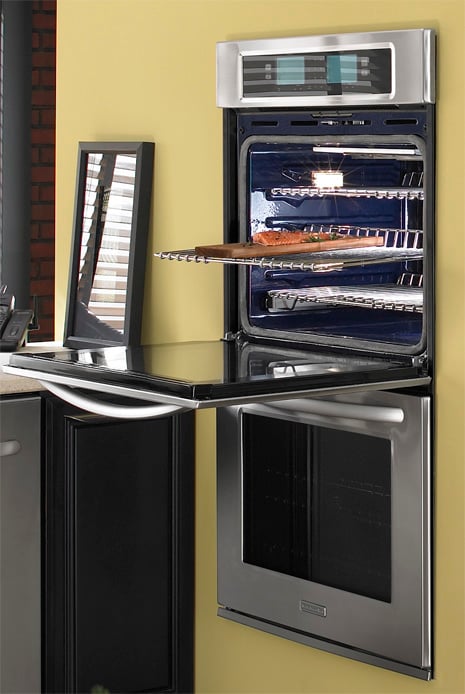 The new 30 inch Architect Series II KitchenAid oven, KEBU208SSS is the first US made full-size, built-in double oven with steam-assist technology in both ovens. With the dual fan convection, this KitchenAid oven achieves even airflow, resulting in consistent cooking with enhanced food flavor and texture on all three racks, and provides a lot of cooking space – the upper oven has 4.3 cu. ft capacity and the lower has 4.1 cu. ft. And with respective ratings of convection and bake elements at 2,800 of 2,000 Watts, the Architect Series II oven doesn’t sacrifice on performance. Broil element has an inner rating of 1,800 Watts and an outer of 1,450 Watts. Upper oven features Forced Convection and Temperature Probe, and self cleaning lower oven has CleanBake Hidden Element, Convection Bake and Roast Selections. KitchenAid equipped this oven with EasyConvect Time and Temperature Conversion systems, taking the guesswork out of convection cooking. True-Broil Reflector concentrates heat, providing consistent and efficient broiling with optimum results. Closed-door convection broil with full and center settings provides high-speed broiling for large or small quantities. Removable temperature probe accurately measures internal temperature of meats, poultry and liquid-based casseroles, so your KitchenAid oven doesn’t overcook. Self-cleaning system with soil level and time selection includes a quick setting for smaller soils, saving time and energy. Glass-touch menu-driven LCD display provides an easy-to-use interface that guides you through all cooking options. Other features of this Architect Series II oven include countdown minute timer, auto and manual light switch, and Sabbath Mode functions. Suggested retail price is $4,200, but you can buy the KitchenAid oven for about $3,900. Also Architect Series II KitchenAid cooktop.

The Scholtes built-in oven, FA 46.1 AN from Tradition series is the energy ‘A’ rated, multi function pyrolytic oven with classic good looks and 9 Read More

For those who would love to own the 30″ TMIO refrigerated dual wall oven but couldn’t agree to part with $7,500 USD, here is the Read More

CDA Appliances are all about performance and reliability. But it is the style which attracts many consumers to this brand and in my opinion the Read More

The 30 inch Gaggenau combination steam and convection double oven, BS280/281 can be either right or left hinged depending on individual kitchen design and taste. Read More