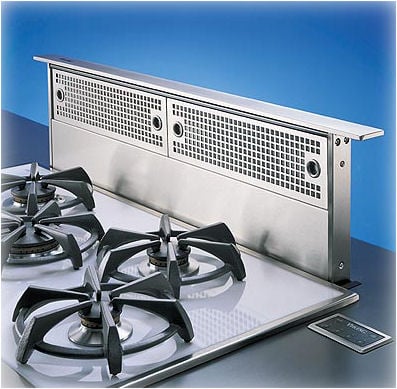 It takes a while for US appliance makers to catch up with the latest Euro design trends, but when they do, they often do an Read More

These stylish, Italian made downdraft island range hoods deliver looks and performance when at work. You simply want them purify the air 24×7 as your Read More

A Whirlpool range hood with a slide out feature provides the function and flexibility you need. Whirlpool makes sure that the sleek stainless steel range Read More

A slide-out range hood from DeLonghi is an innovative solution for kitchen ventilation. This unique design has an extremely slim profile that virtually disappears when Read More

This wall mounted kitchen cooker hood has a distinguished shape that makes it stand out amongst others. This 900mm side chimney hood has a sleek, Read More

The Wall Mounted Range Hood, GTH from Vent-A-Hood features a compact and contemporary rounded design that will compliment you modern kitchen and provide ventilation for Read More

A designer stove hood by Dacor Preference epitomizes the level of style excellence that you would expect from Dacor. The designer wall-mounted island stove hoods Read More