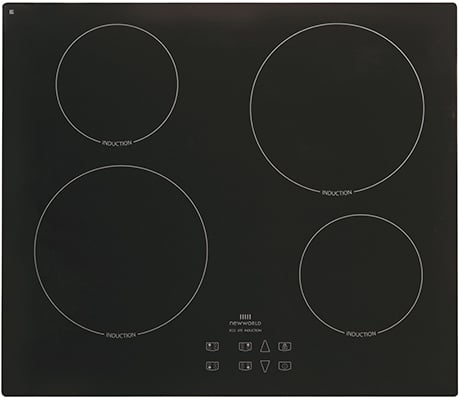 The benefits of induction technology are being opened up to a much wider market with the introduction of an affordable induction hob by New World. The NWELI60 is a 60cm black ceramic induction hob with 4 elements in 2 sizes. It follows New World popular 60cm ceramic hob. The NWELI60 features digital power display, intuitive touch controls, a choice of 9 power levels and a power boost function which allows the user to borrow heat from the other elements to cook at a higher temperature.
The affordable induction hob has a number of built-in safety features including a child safety lock and pan detection and pan overheat sensors, offering the consumer total peace of mind. The new hob will be manufactured at New World’s Prescot headquarters in Merseyside, as part of the company’s commitment to UK based manufacturing. 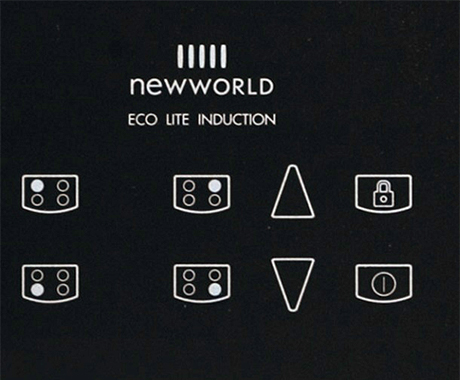 Induction works by creating a magnetic field beneath the ceramic top of a hob that transfers heat directly to the pan above. Unlike gas or traditional electric power, induction cooking works only when the pan is placed within this magnetic zone, so that energy is directed where it is needed. When using an induction hob, more than 90% of every pound spent on energy goes straight to the pan, making it the most cost-effective way to cook.
Jon Brennan, commercial manager for New World, said: The housing market begins to pick up first time buyers and the new build market are creating a real demand for affordable induction technology. New World as a brand has always offered style and functionality at lower prices and so moving into induction is the obvious choice. The NWELI60 ticks all the boxes and hopefully will help to position induction as an affordable and viable option for a far wider market.

Measuring just 52cm in diameter, Giotto and three-burner Rondo look simpy adorable. The round gas hobs from Foster bring versatility and performance in a rather Read More

The new flexible induction hobs from Siemens are going to change the cooking landscape. With Vario cooktops, you can use elements separately or connect the Read More

These stylish Gas-In-Glass cooktops are unique to Oranier. Properly called Gas-Under-Glass, the ECG 2736 has sleek glass ceramic surface with a polished front facet and Read More