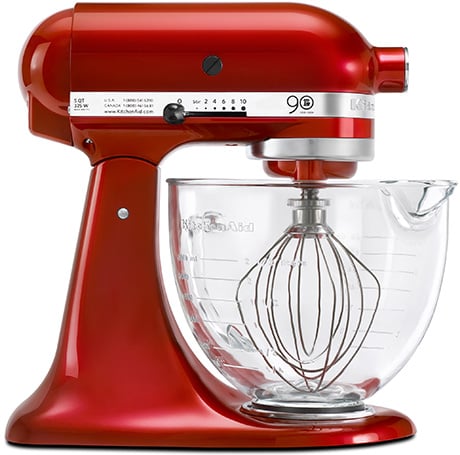 KitchenAid is marking its 90th anniversary with a special edition stand mixer in Candy Apple Red. As a tribute to earlier models, the new 5-quart Artisan Series KitchenAid mixer will include a clear glass bowl in place of the stainless steel bowl currently provided, along with a 90th anniversary insignia on the mixer trim band. Also as part of its anniversary celebration, KitchenAid released a new cookbook, KitchenAid Best Loved Recipes that includes many recipes for the stand mixer. These include everything from making bread dough with the mixer dough hook and homemade sausage with its optional sausage stuffer attachment to creating homemade lasagna noodles with an available pasta maker attachment set. The book is available at major retailers.
The 90th anniversary Candy Apple Red Artisan Series KitchenAid mixer will be available in the summer at a suggested retail price of $400, and feature a glass bowl with a pour spout and measurement markings. Stainless steel bowls will also be available to fit the new mixers. The Artisan Series stand mixer features a tilt-head design for easy bowl access and can accommodate up to 9 cups of flour. A 10-speed slide control ranges from a very slow stir to a fast whip. Its 67-point planetary mixing action spirals to 67 different touch points within the bowl for quick, complete mixing and the highest beater-to-bowl coverage in the industry. Every KitchenAid mixer comes with 3 basic accessories – a flat beater for mixing batters, making pie dough or mashing potatoes, a dough hook for kneading everything from soft dough to stiff pizza dough, and a wire whip for beating egg whites and whipping cream.
By using any of more than a dozen optional attachments, the powerful motor of this KitchenAid mixer can be tapped for everything from grinding grain and meat to kneading dough, slicing vegetables, rolling and cutting pasta, and even making ice cream. Optional attachments for the stand mixer include a slicer and shredder, fruit and vegetable strainer, food grinder, grain mill, citrus juicer and sausage stuffer a pasta roller and a ravioli maker, several pasta cutters including fettuccine, spaghetti, angel hair and wide noodle, and an ice cream maker. Prices on individual attachments range from a suggested retail price of $35 to $160. Special attachment sets, including a pasta kit and a gourmet specialty attachment pack, also are available. 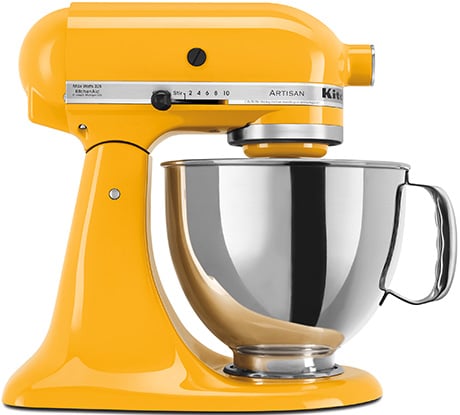 KitchenAid also introduced a cheerful new Artisan Series stand mixer color, Yellow Pepper, at this week International Housewares Show. KitchenAid pioneered color in the kitchen with the introduction of Petal Pink, Sunny Yellow, Island Green and Satin Chrome countertop appliances at the 1955 International Housewares Show in Atlantic City. As KitchenAid celebrates its 90th anniversary year, its colors have transitioned largely to names evoking flavors as much as hues, including everything from Green Apple and Gloss Cinnamon to Licorice and Tangerine. Yellow Pepper, according to KitchenAid was inspired by three things that cooks eagerly await this time of year, summertime, farmers markets and fresh garden vegetables. For consumers who are spending more time in the kitchen these days, this KitchenAid mixer in bright Yellow Pepper will provide a cheering effect.

The latest KitchenAid blenders are so well made, so powerful, so multifunctional and so easy to use, you will want them on the counter tops Read More

With its powerful 10,500 rpm motor, this handheld Bosch blender has plenty of power to meet all your mixing and blending needs. Mixxo cordless immersion Read More

The new BBL800 is the most powerful Breville blender ever designed. Made with durable stainless and die cast alloys, this blender has fewer parts for Read More

This new multifunction cordless blender from Ariete puts you firmly in control of all food processing needs. The compact Freedom 3-in-1 cordless food processor is Read More

You will effortlessly chop and blend everything you need with this cordless Breville hand held food processor and do it anywhere in the kitchen. The Read More