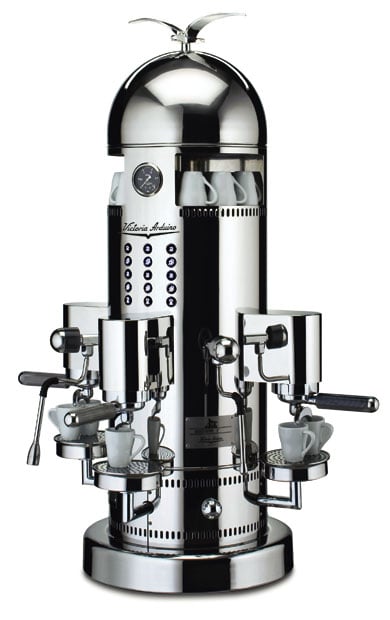 Victoria Arduino Venus Century Espresso Machine is the most expensive and the heaviest we have seen. With its body beautifully crafted from stainless steel, Venus Century weighs 76 kg or 167 lbs. The price is just under $20,000 USD which is not too shocking, considering the fact that only 100 of these machines were made. The very first one was presented to the Pope for his personal use. The Victoria Arduino espresso machine is a symbol in the history of coffee, and the history of Italian customs and culture throughout Europe. Originally created by Pier Teresio Arduino in Turin in 1905, this timeless design shown below has transcended over 100 years. Victoria Arduino. 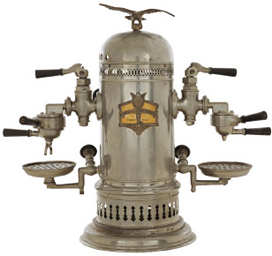 These Ariete espresso machines, You&Me are some of the smallest espressos in the world. In fact, Ariete claims they are, thanks to its exclusive technology, Read More

New for 2007, this Italian made La Pavoni Professional Gold espresso cappuccino lever machine is a combination of style, quality and reliability. A stunningly beautiful Read More

If stopping by the local coffee shop has become a necessity each morning, consider saving time and money with a convenient espresso cappuccino maker from Read More

Sometimes the best things come in small packages and the Siemens TK5 Surpresso is no exception. This compact, fully automatic espresso machine fits in the Read More

Double your coffee pleasure with the new Gemini CS200 and CS220 espresso machines from Nespresso. Both of these innovative coffee machines feature a double headed Read More

Get the perfect shot of espresso every time, with the Cafe Roma Breville espresso maker. Breville delivers this all stainless steel espresso maker with two Read More