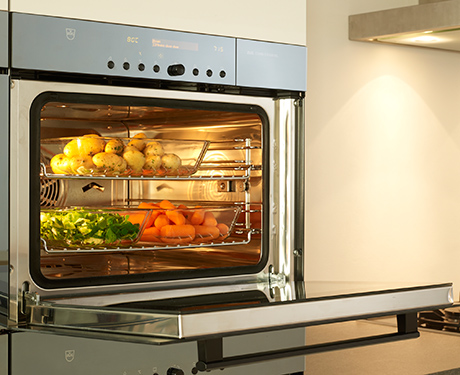 The stylish and high performance V-ZUG steam ovens are coming to the UK. The Swiss based V-ZUG, which is the world leader in steam technology, set to launch a raft of new products in January 2012. Many will be launched in the UK soon after as well. At the heart of this will be a number of new appliances, which use the power of steam to deliver outstanding results for consumers.
V-ZUG introduced their first combination steam oven in Switzerland in 2000. Today, the V-ZUG Futureline collection includes a range of steam oven options, including the Combi-Steam XSL, the world most advanced domestic combination steam oven.

Utilising the benefits of the patented V-ZUG steam generating system and the patented V-ZUG climate sensor, the compact oven gives you total control of the oven and the confidence that your appliance will deliver perfect results every time. From baking cakes to roasting meat, the Combi-Steam XSL adapts to the way in which you cook, taking the stress out of cooking to ultimately make your life easier.
V-ZUG Combi-Steam XSL offers the largest internal cooking space of any 45cm niche appliance with a massive 51 litre capacity and up to 4 shelf positions. It also delivers outstanding performance thanks to V-ZUG patented steam-generating system, which enables you to cook healthy, balanced meals with up to 22% higher vitamin content and up to 36% less fat than with other cooking methods. Exclusive features include Regeneration, SoftRoasting and GourmetSteam. It priced at £3,210, including of VAT. V-ZUG.

This built-in oven from Fulgor does not go in the wall, instead it hides in the kitchen countertop. From there, you can raise it up, Read More

The 24″ wide Miele Speed oven will help you entertain with ease. Well engineered both inside and out, the convection speed oven eliminates the need Read More

This is a large built-in oven with 74-litre cooking cavity that lets you cook everything – from an 18kg turkey to 150 canapes. The AEG Read More

New World has injected some vibrant colour into the kitchen with the introduction of an eye catching new Colours Collection of built-in ovens. Available across Read More

With a 4.8 cubic feet interior cavity, the Dacor Renaissance wall ovens provide the largest oven cell capacity available on the market and are equipped Read More