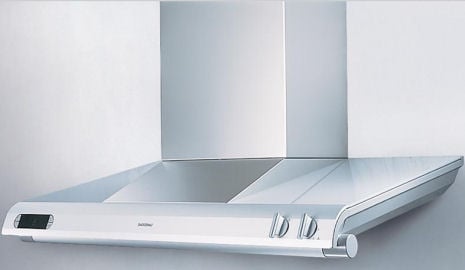 I like the way this 36″ Gaggenau hood, AH 600 looks here, the contoured lines actually resemble the hood of expensive German engineered sedan. Oh well, that is just one man’s opinion, but this range hood does uses a very unique and proprietary Gaggenau technology, called the Coanda effect. This novel and exclusive ventilation system includes another fan positioned at the front of the ventilator to generate a flow of air, which is deflected around a cylinder towards the back of the ventilator. The backward airflow guides any vapor rising from the cooking surface directly towards the filter area of the ventilator, ensuring perfect ventilation over the whole of the cooking area.

This very quiet range hood features tree power levels plus a short intensive mode which boosts extraction for a short period of time – three, five or ten minutes depending on the ventilator model, to cope when cooking generates especially large amounts of smoke or steam. The ventilator returns to its previous power setting at the end of the intensive mode. The AH 600 provides control knob operation, while the other models use push buttons with one button for each power level. The stainless steel filter is easily removable and is dishwasher safe. Once an excessive accumulation of grease and dirt begins affect the performance and efficiency, the filter saturation indicator starts flashing reminding you to put it in dishwasher.

The large, easy to read digital display shows the power level selected. Push buttons, one each for Intensive Mode, Delayed Shut-off, Coanda Effect and Filter Reset bring up additional functions. The AH 600 ventilator hood can be used in both exhaust and recirculation systems. Both alternatives initially pass contaminated air through a grease filter to keep the interior of the hood and the air ducts free of unpleasant deposits. In the exhaust configuration, the air is then expelled to the outside either via a ventilation shaft or directly through an exterior wall. In the recirculation configuration, it passes through a built-in activated carbon filter to remove odors and then returns to the room. The activated carbon filter typically requires changing twice a year, which is a very simple operation requiring no tools.

Gaggenau also equips this range hood with the three 50W halogen lamps to provide optimal glare-free illumination of the entire cooktop. The three lamps, which are arranged along the rear wall, give the strongest illumination available under a kitchen ventilator. The intense halogen light of the AH 600 emits a similar color temperature to sunlight, which makes it very easy on the eyes. The interval ventilation feature lets you set the ventilator to switch on automatically for five minutes in hour at the power level selected. Delayed shut-off function allows to continue kitchen ventilation after you finish cooking. The ventilator will run at the selected power level for an extra ten minutes to catch any remaining vapor and leave the kitchen air absolutely clean. Buy the 36″ AH 600 Gaggenau range hood for about $2,550 USD. Previously, Gaggenau AT 400 ventilation table.

With the growing popularity of open kitchen plans, the role of island range hoods has become the one of a decorative centerpiece as much as Read More

The 48″ Gaggenau hood comes with 2 additional fans that send airflow towards a cylinder positioned right at the front of the ventilator, creating Coanda Read More

[KBIS 2006 Reviews] Gaggenau AT400 ventilation table is designed to be installed on the kitchen island to extract undesirable cooking smells. Very quite and efficient, Read More

Once in a while, a company takes something quite ordinary and with a few small and elegant touches, completely changes it into a piece of Read More

The Gutmann Nube will smoothly float above your kitchen island, creating an unforgettable view for you to enjoy every evening. The perfect combination of best Read More

The N’Khan contemporary island hoods from Roblin offer such a simplistic and pure design, that from the first look it is hard to realize that Read More