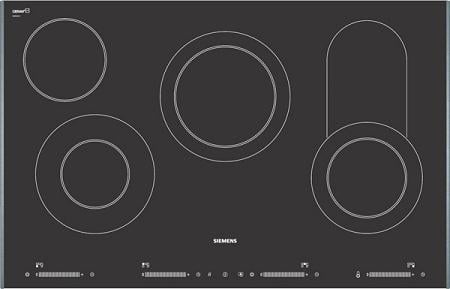 The new and unique to Siemens touchSlider cooktops introduce an inventive operating concept for hobs and brings the best Siemens technology and design for the most picky consumer. Simply put, the modern touchSlider hobs are cool, operating simply by reacting to the touch of a hand. Each hotplate or zone on the hob has a touchSlider scale, similar to a laptop touch pad on the front flat surface of the ceramic glass. Glide a finger across the touchSlider control and the appropriate power level is activated, heating up the selected zone. No more turning or pushing and in a split second, the variable temperature is set and cooking begins.
There are four cooktops available with the touchSlider controls, the 60cm and 80cm electric ceramic hobs, and 80cm and 90cm induction cooktops, all of which provide four cooking zones, with an extra fifth zone on the top of the range 90cm model. All the touchSlider Siemens hobs feature faceted front edge design with stainless steel side trims to blend in with other Siemens cooking appliances, and come with the following advanced features, including a boost function to enable high speed cooking, a child safety to lock and deactivate all functions, an electronic boil-start function which allows cooking to continue on a set power after preheating on maximum power without any need for readjustment, a control panel pause function which freezes the hob settings to allow the control panel to be wiped over and cleaned during use, thus preventing the sensors from mistakenly interpreting the wiping of spills and spatters as an adjustment of the cooking level, and LED display and timer for all cooking zones with a switch off function, acoustic signal and two-stage residual heat indicator for each zone to indicate whether they are above or below 50°C.
For complete details on touchSlider induction and electric ceramic cooktops see Siemens hobs. Also modern gas cooktops.

An induction cooktop line featuring and innovative technology that connects it with Elica range hoods, the Lien Hobs feature a system that controls the cooking Read More

New World has launched its first hob with touch controls, making the technology available to everyone. The NWTC60 is a 60cm ceramic hob with innovative Read More

This built-in Kuppersbusch Profi-Cook Center is a bit more affordable than the just featured telescopic Cook and Grill Zoom cooking center and, quite frankly is Read More

The Miele Combisets take away the ever puzzling cooking dilemma – what is the best cooking surface to use for what type of food, and Read More