Known perhaps more for its sleek 4-door refrigerator models, Samsung moves to solidify its position in Side-by-Side segment within the European market with the large HM12 side by side refrigerator from the H-Series. 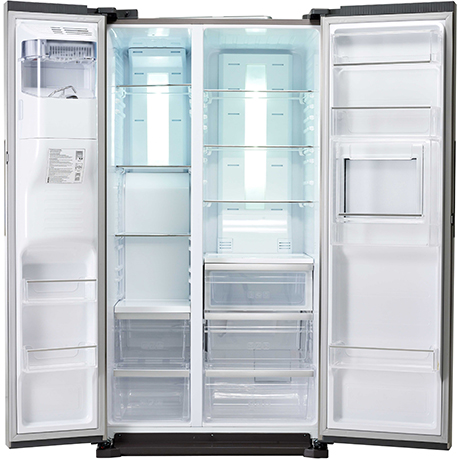 The first side by side refrigerator produced at Samsung Electronics Poland Manufacturing is equipped with the best space innovation, including an array of boxes, shelves and guards capable of containing large capacities at a time. Samsung Space Max technology features the new H-Series interior design that provides for the ultimate capacity while keeping depth and width at just over 71cm and 91cm respectively. Now European consumers will be able to store a variety of grocery items in a refrigerator that fits nicely in any kitchen space.
The new Samsung H-Series Side by Side refrigerator also comes equipped with better insulation, sleeker walls and upgraded energy efficiency of ‘A++’. Its LED interior lighting offers ultimate brightness and convenience. In addition, the side by side refrigerator has a new touch display and an upgraded interior design of enhanced boxes, shelves and guards.
The H-Series refrigerators are available in a wide range of options such as with or without water & ice dispenser and colors, as well as options to suit different lifestyles. And Samsung Twin Cooling Plus System will keep the food fresher and longer as it utilizes separate cooling systems in the refrigerator and freezer, giving better temperature control, higher humidity and preventing the mixing of odors. The new H-series HM12 will be available across Europe in May 2012. Samsung.
Previously,
Samsung G-Series combi fridge freezer
Samsung G Series fridge freezer
French Door refrigerator from Samsung
Samsung S P A C E refrigerator
Samsung Zipel e-diary refrigerator
Samsung French Door refrigerators
Samsung refrigerator with mirror doors
Samsung J-Series refrigerator by Jasper Morrison

Belonging to Samsung 9000 Series of modern appliances, the Zipel FS9000 is divided into the InCase fridge compartment for bulky and less often used foods, Read More

The striking ATAG Cooling Center, the KA2411DW side by side refrigerator with wine cooler solves your refrigeration needs in one stylish stainless steel unit, which Read More

This innovative four door side-by-side fridge freezer, Smeg FQ60XPE makes the best and most logical use of its impressive 610 litre capacity, offering flexible and Read More

Toshiba GR­D62FR 6-door multi-level refrigerator There were times when all refrigerators had just one door. Later, the freezer compartment was added. Then separately cooled, fully Read More

We wrote about this beautiful Samsung Zipel refrigerator before, when it was only available in Korea. Now that you can buy it from Harrods in Read More

With the upcoming G-Series combi fridge freezer from Samsung, you will get a large capacity bottom mount freezer in surprisingly compact size. Offering 440 litres Read More

The new CAFF20, freestanding, side-by-side Caple fridge freezer is designed to maximise storage space. This makes it first choice for bigger families and those who Read More

Thanks to its compact size, the Liebherr UIK 1550 under worktop fridge fits in like a cabinet or dishwasher under any standard kitchen countertop. The Read More

The latest offering from Electrolux in China – the Willow range of refrigerators – is a great example of how art, innovation and function can Read More